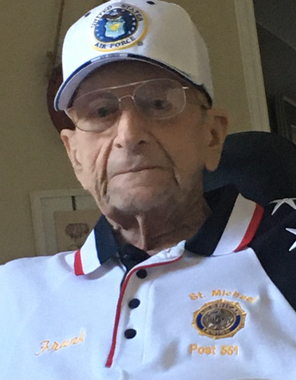 Back to Frank's story

83, resident of Punta Gorda/Clermont Florida, with heavy hearts we announce the passing of our beloved husband, father, grandfather, brother, uncle and friend. He passed from this life on December 30, 2019 at Southlake Hospital in Clermont Florida. Frank was born in Windber, PA on March 17, 1936 to parents, Frank and Stephanie Berkey. He graduated in 1954 from Windber High School. Frank enlisted in the Air Force reserves during his junior and senior years of high school and enlisted in the Air Force after graduation. After serving in the Korean War he returned home to marry Harriet J. Murphy who preceded him in death. He is survived by a son, Frank R. Berkey and wife, Jennifer; daughter, Cynthia M. Berkey and granddaughter, Abbey D. Tomes; brother, Donald and Annabelle Berkey of Windber, PA. and preceded in death to his, sister, Judy Kostic. Frank will be laid to eternal rest on February 17, 2020 at the National Cemetery in Sarasota, Florida at 11 a.m.
Published on January 19, 2020
To plant a tree in memory of Frank R. Berkey, please visit Tribute Store.

Plant a tree in memory
of Frank

A place to share condolences and memories.
The guestbook expires on April 15, 2020.