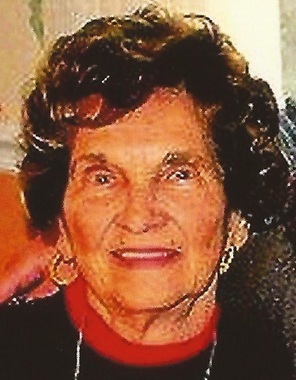 Back to Helen's story

98, Franklin Borough, passed away November 10, 2019 at LaurelWood Care Center. Born August 23, 1921 in Franklin, in the same house she resided more than 90 years; daughter of Stephen and Mary (Grofik) Kormanik. Preceded in death by her parents; husband Milan "Hank" Mastovich, who died May 21, 1977; son Paul Mastovich and daughter Karen Yarina; infant twin brothers; infant sister; sisters Anna Gatalo and Mary Kuzmiak; and brothers, Stephen, John and Nicholas. Survived by sons Michael (Kathleen) and Stephen Mastovich; Son-in-law Robert Yarina; seven grandchildren; and 10 great-grandchildren. Helen was a 1939 graduate of Franklin High School. During World War II, Helen worked at the Bethlehem Steel Wheel Plant, filling a "Rosie the Riveter" role. She was employed by the PA Workman's Compensation Office in Johnstown and served on the Democratic Party Committee in Franklin. Helen was a member of St. Nicholas Serbian Orthodox Church in Westmont. At Helen's request, there will be no public viewing. Committal service will be held at 11 a.m. on Wednesday at Forest Lawn Memorial Park Chapel, Very Rev. Fr. Milan Dragovic. The family is being served by the Baker-Harris Funeral Home, 229-231 First Street, Conemaugh. Contributions may be directed to St. Nicholas Serbian Orthodox Church, Bell Tower Fund, 971-1001 St. Clair Road, Johnstown, Pennsylvania 15905 in memory of Helen. Online condolences may be posted to www.wharrisfuneralhome.com.
Published on November 11, 2019
To plant a tree in memory of Helen Mastovich, please visit Tribute Store.

Plant a tree in memory
of Helen

A place to share condolences and memories.
The guestbook expires on February 09, 2020.

george ceglar
Helen married my moms cousin Hank. She always rode the bus, home in the afternoon, we would chat when we ran into each other. I went to school with Karen and Bob.
Jimmy Mattes
I will always remember your Mom as our Second Mom. Its been a long time since I have been back in Franklin, but I always remember those days with smiles and tears. Part of your family has just met our Mom in Heaven.
Lucian "Pete" Mattes
So sad to see a great lady pass. She was always very nice to my brothers and me after our Mom died. I will always remember Paul running on the wrap around porch and breaking through the railing and Mr Mastovich catching him by one hand. Mrs Mastovich was not a happy person that day but grateful that no one was seriously injured.
Sock ball in the street, riding down the alley in the hood of an old Chevrolet and running the Terraces. Those were Happy days in our lives. May she rest in peace.
Michael and Stephanie Mino
You have our deepest sympathies. So sorry.
Ann Carlton
Helen was a beautiful, kind and sweet person. My thoughts and prayers are with you during this time of grief. Ann
Tracy
So sorry for your loss. Prayers for family and friends. 🙏
Patty & Mike Devich
You have our sincere condolences on the loss of Helen. Memory eternal ☦️☦️☦️
Cecil Cole
So sorry for your loss
Jessica Doss

Written in the Stars was purchased for the family of Helen Mastovich by Jessica Doss.  Send flowers

Trudy Reighard
My thoughts and prayers are with you all
Robin Mattes
Tike and Steve my condolences for the loss of your mom. Growing up on Spruce St i was probably in your house as much as mine. Your mom was a great person. She will be missed but never forgotten. May she rest in peace.
View all