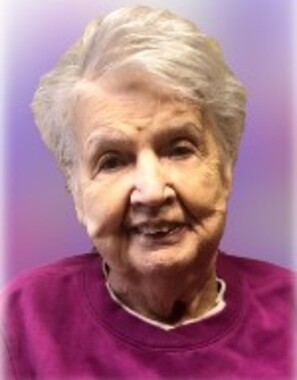 Back to Irene's story

88, a long-time resident of Ebensburg , died December 7, 2019 under the compassionate care of the attentive staff at Garvey Manor, Hollidaysburg. Irene married the love of her life, Michael P. Barno (Micky), and they enjoyed 58 years of marriage before his passing in 2014. Survived by children: Eric Barno (Kimberly Thomas) of Deale, MD; daughter Jean Barno Maisano (James Maisano) of New Rochelle, NY; grandsons: Nicholas Barno and Michael Maisano; as well as numerous nieces, nephews, grand-nieces and grand-nephews. Irene is preceded in death by all of her brothers and sisters: John Sado, Charles Sado, Mary Edwards, Helen Lion, Catherine Sado, Annie Stiffler, and Sophie Kervin . Born on August 23, 1931 to Charles and Helen Sado, Irene grew up on a farm in Colver. She graduated from Blacklick Valley High School and, prior to her marriage, worked at Bell Telephone Co. After marriage, she briefly moved to Bellefonte before returning to Ebensburg. Irene dedicated herself to meticulously establishing a warm and loving home for her family and creating memories worthy of a storybook. Christmas and Easter were filled with trays of home-baked cookies and birthdays celebrated with red velvet cakes. Sunday meals were followed by trips to the farm to visit family. She was a treasured friend to many, always taking time to give others comfort. Irene was a long-time member of Holy Name of Jesus Roman Catholic Church, Ebensburg, where in the 1970s she helped organized the annual festival and calendar party, made baptismal bibs, and cleaned the church. When her children grew, she went on to work at Laurel Crest Manor in the laundry. After her retirement, she volunteered with St. Vincent DePaul. Irene was a masterful gardener, a skilled craftswoman, and a wonderful cook. Her greatest joy came from caring for her family and friends, always making people feel special with her thoughtful gestures, and she adored her grandsons beyond measure. A gathering of friends will be held at 11:00 a.m. Monday, December 16th at the Holy Name Church Narthex, followed by a Funeral Mass will be held at 11:30 a.m., the Rev. Fr. Brian Warchola, celebrant. Interment at Holy Name Cemetery. In lieu of flowers, memorial gifts can be made to Garvey Manor, 1037 S. Logan Blvd., Hollidaysburg, PA, 16648 or to John Paul II Manor, 856 Cambria Street, Cresson, PA 16630. Arrangements are in the care of the Askew-Houser Funeral Homes, Inc., Ebensburg.
Published on December 9, 2019
To plant a tree in memory of Irene (Sado) Barno, please visit Tribute Store.

Plant a tree in memory
of Irene

A place to share condolences and memories.
The guestbook expires on March 08, 2020.

Steve & Kelly Topilnycky
Dearest Jean, Jim & Michael,
Our deepest condolences to you and the family on the passing of your beloved mother Irene. You all will be in our thoughts and prayers during this time of sorrow.
joseph lyle
I JUST WANT TO SAY I AM SO GLADE I GOT TO MEET HER 2 YEARS I GOT TO SEE HER WE EVEN HAD DINNER WITH HER TO I MADE HER SMILE WHEN I WAS THERE TO I WILL MISS HER A LOT SHE WAS A GREAT PERSON TO KNOW I AM GLADE I GOT TO SEE HER THIS PAST SUMMER CHUNKIE THANK YOU FOR TAKING ME TO SEE HER I AM GOING TO MISS HER A LOT LOVE SPARKY AND FAMILY
NANCY
Jean and Eric I am so very sorry or your loss. Peace be with you both at this trying time. Love you both!
Nancy from florida
Carolyn Werner
Jean, Jim and Michael- I’m so very sorry for your loss. Thinking of you all and sending my deepest condolences. ❤️🙏🏻
Cristina Ortolani
Dearest Jean, Jim and Michael,
I am so very sorry to hear about your loss. I am sending you all big hugs and plan to stop by New Rochelle to deliver them in person some time over the Christmas break. Your mom’s greatest legacy is living on in you, her children, and grandchildren, who are a living testimony to her faith and love. I remember vividly her proud to busting smile whenever she’d visit and how she’d laugh at that corny mother in law joke Jim. She’s going to be enjoying the best angel choir this Christmas, with the best view of all the twinkly lights, winking down on you always.
Safe travels my friends.
Cristina
Rick Rubisch
Sorry for the passing of a truly remarkable woman. I'm sure she is now in a much better place.
View all