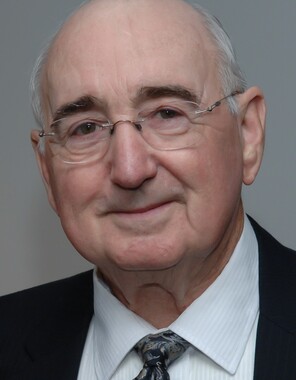 Back to John's story

John "Jack" Daniel Buser, 89, of Wyomissing, passed away Monday, December 9, 2019 at 12:14 am in his residence following a long battle with cancer. Born at home in Johnstown, PA, September 20, 1930, he was the son of Charles E. Buser, Sr., and Clara M. Nightingale, of Johnstown. He was one of four children, and was preceded in death by his sister Clair Meehan James and brother Charles E. Jr. He is survived by his sister Rosalie Thomas of Greenbelt, MD. He is also survived by his loving wife of 64 years, Virginia (Marshall); they lived in the Johnstown area until 2014, when they relocated to Wyomissing, PA, in order to be near two of his daughters. He is survived by his children Dani Magistro, wife of Phil, of Wyomissing; Maureen Longenecker, wife of Bruce, of Wyomissing; Elizabeth Betts, wife of Richard, of State College, PA; and John P. Buser, husband of Nicole, of Bellows Falls, VT. He is also survived by 8 grandchildren and 12 great-grandchildren. He was most recently a member of St. Ignatius Loyola Catholic Church; he was a member of Visitation Church, Johnstown, PA from 1930 to 1990, and St. Anne's, Davidsville, PA from 1990 to 2014. Jack attended Berkley Hill grade school and Westmont-Upper Yoder high school. Following 10 years of night school, driving 70 miles from Johnstown to Pittsburgh to attend classes, Jack graduated with a BS degree, cum laude, from the University of Pittsburgh. He worked for US Steel, Johnstown Works, for 36 years as a laborer, bricklayer, and retired as roll shop supervisor. He served in the US Air Force from 1950 - 1954 during the Korean War. One year of service was in Korea in the 606th AC&W sqdn. In 1955 he married Virginia Marshall. He volunteered for 29 years in pastoral care at Conemaugh Valley Memorial Hospital and he volunteered for many projects with the Knights of Columbus in Johnstown. He was a life member of the K of C, Third Degree, in Wyomissing and Johnstown, and a Fourth Degree life member in Johnstown. He was a life member of Johnstown Elks #175 and a member of American Legion Post 802, Johnstown. He enjoyed playing golf and won many long drive contests. His interest in golf began in 1939 at the local golf course finding and selling golf balls to help support his family. He learned to play golf with wooden-shaft golf clubs and earned 50 cents a round caddying.
Mass of Christian Burial will be celebrated in Saint Ignatius Loyola Roman Catholic Church, 2810 St. Alban's Drive, Sinking Spring, Thursday, December 12, 2019 at 12:00 pm. Reverend Stephan Isaac, Celebrant. Interment will be held in Grandview Cemetery, Johnstown, Friday, December 13, 2019 at 10:00 a.m. Reverend David Peles will officiate. The family will receive relatives and friends in Saint Ignatius Loyola Roman Catholic Church, Thursday 10:00 a.m. to 11:45 a.m. Bean Funeral Home, 3825 Penn Ave. Sinking Spring is in charge of arrangements and online condolences may be made at www.beanfuneralhomes.com
Published on December 10, 2019
To plant a tree in memory of John D. Buser, please visit Tribute Store.

Plant a tree in memory
of John

A place to share condolences and memories.
The guestbook expires on March 09, 2020.

Keith Mayer
I knew John as an extremely dedicated and faithful hospital volunteer. When I saw his photo I smiled. YOU felt more alive during a conversation.Passionate , opinionated and usually right, too. Enjoyed our discussions on cars especially that MG.I never saw the car but always pictured him driving it with this huge grin.Sympathy to Ginny and family.
Tony DeLuca and famili
Oh boy, you could write a book. I knew John in his later years. What a good man and devoted catholic. We missed him when he and Ginny left the Boswell area 5 years ago. A big man and well respected. Deepest sympathy to the entire family. Tony DeLuca
Robert Callahan DDS
John was a great guy, always a smile and always first appointment in the morning, and was really proud of the cars. My best to Virginia. Bob Callahan
View all