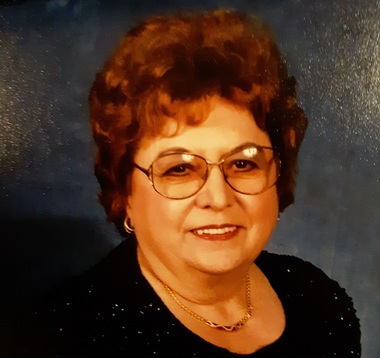 Back to Loretta's story

, 91, Patton, passed away January 25, 2020 after a long battle with Alzheimer's Disease. Born February 3, 1928, in Patton, the daughter of the late Anne Pearl (Flesher) Haluska, and former Pennsylvania State Senator, John J. Haluska. In addition to her parents, she is preceded in death by husband, Gerald Francis Albright, and her little brother, Thomas, who tragically died at the tender age of seven. She is survived by her eight children, Sharon (the late John K. Adams), Marsha, Wayne (Gaye Fifer), Terri (Jim Lewis), Dale (Beth Cloherty), Gale (Tom Ogden), Lori (Bill Lauff) and Eric; twelve grandchildren, Kimberly (Michael), Christopher, Dominic, Adam, Mark (Alisa), Julie, Elizabeth (Mark), Carolyn, Michael (Lia), Stephen, Ben, and Luke (Alicia); and seven great-grandchildren, all because two people fell in love. Sister of Gladys Welty. Loretta graduated from Patton High School in 1945. While in high school she was chosen Miss Coal Queen and became the first female life guard in this small town. She attended the University of Pittsburgh, took a break to elope and raise their eight kids, then returned to the University of Pittsburgh at Johnstown, to complete her bachelor's degree in writing at the age of 50! She loved to travel, and did so, all over the world with her mother and sister, and domestic trips with the whole family. She loved learning new things, meeting new people, discovering new places, dancing, singing, cooking, and many other creative endeavors. After she had an empty nest, she owned and operated a bed and breakfast for ten years in their home, The Nationality House, which was a great outlet for her creativity and desire to meet new people from far and wide. At the request of Loretta, there will be no viewing or visitation. A memorial service will be announced in the spring at www.moriconifuneralhome.com. Moriconi Funeral Home, Inc., Northern Cambria is in charge of arrangements. In lieu of flowers, please make a donation in her memory to the Alzheimer's Association
Published on January 25, 2020
To plant a tree in memory of Loretta Jane Albright, please visit Tribute Store.

Plant a tree in memory
of Loretta

A place to share condolences and memories.
The guestbook expires on April 24, 2020.

Louise M LecheneDimond
My condolences on learning of Loretta's passing. I remember her as a woman with great style and flair.
Josh Crawford
My thoughts and prayers to her family and friends. I work at RoseCrest and she was always happy. I told every morning we was going to dance later in the day. She got a big smile and said she loved to dance. She will be missed by many people.
Dori Depp
I’ve known Loretta since college age she was always interesting to talk to and has a wonderful family
View all