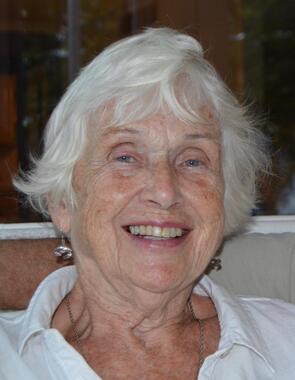 Back to Patricia's story

Patricia was an amazing woman. She wanted to be remembered as being kind, and she accomplished that and much more. She also will be remembered as a devoted spouse, mother and mentor to seven strong women, grandmother to 20 and great-grandmother to 12. She was born May 27, 1933 in Swissvale, PA and died February 4, 2020 at Redstone Highlands in Murrysville, PA. She graduated from Swissvale High School in 1951 and from Seton Hill College (University) in 1955. She married her childhood sweetheart, Thomas H. Loughran, in 1956 and in the course of their 60-year marriage they created a family that is sustained by love, laughter, and faith. Thomas Loughran died in 2017. She also was preceded in death by her parents, Ralph and Barbara (Gorham) Robinson, as well as siblings Ralph, Harry, Richard, Billy Robinson, and Mary Louise (Robinson) McCutchen. She is survived by daughters Kathryn (Greg) Cala, Ann (Dennis) Cutrell, Bernadette (Mike) Cala, Mary Jo (Maxine) Loughran, Sharon (Ed) Brown, Sheila (Ed) Burgard, and Jenifer (Stu) Selzer. Patricia's lifelong spiritual home was the Roman Catholic Church and she was actively involved in service in every parish to which she belonged including North American Martyrs (Monroeville), Our Mother of Sorrows (Johnstown), and Holy Trinity (Ligonier). Patricia also served others through her work. While raising her family and teaching, she pursued two graduate degrees in counseling and pastoral ministry. She served as the Director of Financial Aid at St. Francis University and ended her career as a pastoral associate. She was called to meet the spiritual needs of the bereaved, especially those who had lost a child. In her later years, Patricia struggled with dementia, which she openly acknowledged and confronted with grace and humor, all the while continuing to reach out with comfort and kindness to those around her. A funeral Mass will be celebrated at 11 a.m. Saturday, February 15, 2020 in the Saint Vincent Basilica Parish, 300 Fraser Purchase Road, Latrobe, PA 15650, with the Rev. Thomas Curry, O.S.B., as celebrant. Friends and Family will be received at the Fred Rogers Center following Mass. Private inurnment will follow in the Saint Vincent Mausoleum. In lieu of flowers, the family requests that contributions be made to East Suburban Citizens Advocacy 4459 Old William Penn Highway #200, Murrysville, PA, 15668 http://www.eastsuburbancitizenadvocacy.org/ Arrangements are by SNYDER FUNERAL HOME, INC., Ligonier.
Published on February 6, 2020
To send flowers to the family of Patricia Loughran, please visit Tribute Store.

Send flowers
in memory of Patricia

A place to share condolences and memories.
The guestbook expires on May 06, 2020.

Written in the Stars was purchased for the family of Patricia Loughran by Tribute Store.  Send flowers

Dreams From the Heart Bouquet was purchased for the family of Patricia Loughran by Tribute Store.  Send flowers

Joyful Memory was purchased for the family of Patricia Loughran by Meg Schaefer and Steve Katter.  Send flowers

Jan Burgard
From my first meeting. I knew that Pat was a very special woman. She radiated Love. I never knew the extent of her accomplishments until now. However, I am positive that if she were asked she would say that her daughters and their children are her greatest accomplishment. They are carrying on her Love for all. What could be more rewarding . I am so grateful and proud to have known Pat.
I extend my Love to her family.
Kim Ring
What a beautiful woman inside and out. I had the absolute pleasure of meeting Patricia when she and her husband were in Chapel Hill - in either 2016 or 2017. She was so gracious and kind AND FUNNY and was caring for her husband so sweetly. What a blessing to see her again at Eddie and Val’s welcome party in Carrboro. All my love and blessings to the seven sisters and their families. Peace and grace to you. Kim Ring (friend of Sheila)
Jeffrey Kukura
I am really sorry for your loss - your family and the wonderful times and memories I have from O.M.O.S , Bishop McCort and of course Baskin Robbins will always be treasured.
Mary Shingle
I'm so sorry for your loss. I worked with Pat at St Francis University. She was my supervisor. Loved her dearly. I enjoyed working with her. She was a joy to work for. She will be missed deeply.
Caryl (Stingel) McClain
So sorry to hear of your loss. We graduated in the same class from Swissvale High School. I remember Pat at school, even thought we were not close friends, but in our high school you knew EVERYONE. She was such a nice person and had a funny personality. A few years back I was at the Ligonier craft show and came across with each other and had a nice reunion just talking. We've lost a lot of our classmates and it's sad to lose another.
Dennis Loughran
Pat and THL your work shows of a job well done. JACK and GAIL MCNICOLL st thomas ont. canada
We remember the good times
Anna Van Fleet
My heart ❤️ and soul goes out to everyone who has any connection to this wonderful Loughran family! You have my deepest and heartfelt sympathy on the loss of your beautiful Mom/Nana, Grandma. She will always be remembered as a very loving person. 🙏💗🙏
View all