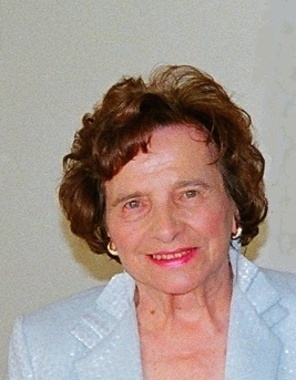 Back to Rosemary's story

(Podrasky), of Westminster, Maryland died surrounded by her family on December 28, 2019. She was 90 years old. Mrs. Roberts was born and raised in Johnstown, Pennsylvania. She was the daughter of Albert and Josephine Podrasky and was one of five children. While working in Johnstown, she met and married John G. Roberts, Sr. in 1952, who preceded her in death in 2008. She worked as a customer service representative for A&P Supermarkets and the Bell Telephone Company in Pennsylvania and New York. Mrs. Roberts is survived by her four children: Kathleen A. Godbey of Valparaiso, Indiana, John G. Roberts, Jr. of Chevy Chase, Maryland, Margaret R. Roberts of Timonium, Maryland and Barbara R. Burke of Hampstead, Maryland. She had six grandchildren and one great grandchild. Over the years, the Roberts family transferred to locations where the Bethlehem Steel Corporation had facilities in New York, Indiana, Pennsylvania, and Maryland, and later to Ohio and South Carolina for other business opportunities and retirement. Mrs. Roberts quickly immersed herself in the activities of her children's schools and local religious and charitable organizations. She enjoyed serving as a hospital and library volunteer in several states and volunteering with the Service League of Michigan City, Indiana, the American Cancer Society, and the American Heart Association. While living in South Carolina, Mrs. Roberts served as a docent with the Columbia Museum of Art. She traveled extensively and frequently accompanied her husband, a steel industry executive, on travels throughout the world. She enjoyed reading, art, music, working the morning crossword puzzle in pen, and participating in golf and bowling leagues. Mrs. Roberts and her husband returned to Maryland in 2001 to enjoy retirement and to be closer to their family. Services and interment are private.
Published on December 31, 2019
To plant a tree in memory of Rosemary A. Roberts, please visit Tribute Store.

Plant a tree in memory
of Rosemary

A place to share condolences and memories.
The guestbook expires on March 30, 2020.

Martin Lison
So sorry to hear about Rosemary. The few times I got to spend with her talking over family history were very pleasant. She was a kind, generous and gracious lady.
Lisa Ann Steiner

Deep heartfelt condolences to my cousins Jack, Kathy, Peg & Barb. Please know a Mass will be said at St. Luke Catholic Church in Shoreline, Washington, January 10, in Aunt Rose’s honor. My mother Rita Jo Steiner was her sister & they remained close over the years.

She is with Uncle Jack & all her family & friends in paradise. Eternal rest grant to her O’Lord, & let perpetual light shine upon her beautiful soul.

Samuel Manganello
Rosemary (Rosie) was one of the most liked girls as a student at Johnstown Catholic High School (class of 1947). She participated in several school activities, and left us with many fond memories.
Peggy Goddard Terrell
I have fond memories of Aunt Rosemary and Uncle Jack from their retirement in Columbia , South Carolina. Uncle Jack was the beloved brother of my mom.
On the other side it is morning and all is light and joy in Christ.
May Aunt Rosemary enjoy that Light and peace. Peace and comfort to all.

Full Of Love Bouquet was purchased for the family of Rosemary A. Roberts.  Send flowers

Ann Margaret Zelenka
To Peggy, John, Barbara, Kathy, grandchildren and great grandchild of great Aunt Rosemary and the rest of the Roberts family: on behalf of the Goddard family and of my own immediate family, I wish to express my deepest and most sincere condolences on the passing of great aunt Rosemary. My grandmother Margie Roberts Goddard and others in the family always spoke so fondly of your family, of Jack and Rosemary and of all of you. When my mom Rosemary passed away, your mom and family were very supportive. When Grandma Margie passed, again the same love was shown. May you know I love each and every one of you and am deeply saddened by this loss. May you know your mom, grandma, great grandma, lov...ing family member and friend is now with our Loving Savior Jesus and with our Blessed Mother Mary, with Great Uncle Jack and with all other family members gone before us in Heaven. May the angels lead her into paradise, may the martyrs come to welcome her, and lead her to the Holy City, the new and eternal Jerusalem.

All my love,
Ann Margaret ZelenkaRead more
Sarah
Losing your mother is never easy. Losing a loved one at holiday time is doubly painful. May God grant you peace and comfort at this time. The loss never goes away, but He can help you bear it.
Melissa Y Stone
My "Tiny Mighty Rosemary Roberts."
How I loved your Mother! It was my pleasure and honor to have taken care of her. We would sing "You Are My Sunshine " MANY times in the course of an 8 hour shift. I always told her we should take our act on the road, and call ourselves "Rosemary and the Wellspring girls". We would laugh alot together. She trusted me completely with her care and knew I loved her. And I know she loved me. Shed been in my prayers since I left. And now, you, her family are on my prayers. She has joined Gods fleet of "Angel Mom's" to look over you from heaven. Know that she is always with you, whenever you need her. God Bless you all.
Larry & Peggy Burnell
Our deepest condolences to your family on the loss of your precious mother.
Patrick & Lyn Murray
Please know a Nation mourns with you. We are so sad you lost your Mother.

Sweet Tranquility Basket was purchased for the family of Rosemary A. Roberts by Pat and Greg Lafferty.  Send flowers