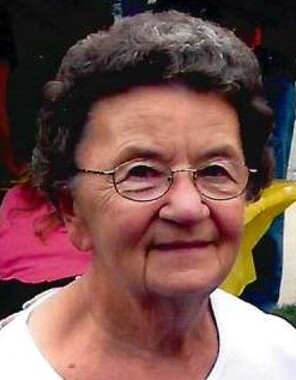 Back to Stella's story

(Korhut), 89, Windber, went to be with the Lord November 1, 2019. Born April 30, 1930 in Windber. Daughter of Nufer and Catherine (Kolodrup) Korhut. Preceded in death by parents; brothers, John, Peter and wife, Margaret and George and wife, Pauline; sister, Mary and husband, Frank Gerula. Survived by loving husband of 63 years, Robert Zabrucky and children, Patty (Zabrucky) wife of Emil Misichko, Wheeling, Illinois and Bob Zabrucky and wife, Missy (Rico), Windber. Four grandchildren, Michelle, wife of Paul Moceri; Matthew Misichko and wife, Ellie; Tyler Zabrucky and Erica Zabrucky; and one great granddaughter, Lucia Moceri. Also survived by sister, Annie, wife of the late Clarence Lehman and sister-in-law, Agnes Korhut, both of Windber. Stella was a graduate of Windber High School class of 1948. She was also a life long member of SS. Peter and Paul Orthodox Church, Windber. A special thank you to Windber Hospice for their exceptional care. Stella was a kind and loving wife, mother, grandmother and great grandmother. She truly loved God and her family and will be greatly missed. Friends received from 5 to 8 p.m. Monday at the William Kisiel Funeral Home, Windber where Funeral Service will be held at 7 p.m. Monday. Brief service 9:30 a.m. Tuesday at the funeral home followed by Divine Liturgy at 10 a.m. at SS. Peter and Paul Orthodox Church, Windber. The Very Rev. Father Miles Zdinak. Interment Church Cemetery, Windber. In lieu of flowers, donations may be made to Windber Hospice, 600 Somerset Ave., Windber, PA 15963; SS. Peter and Paul Orthodox Church of Windber or the Windber Rambler Letterman's Club Scholarship Fund in Stella's memory.
Published on November 3, 2019
To plant a tree in memory of Stella Zabrucky, please visit Tribute Store.

Plant a tree in memory
of Stella

A place to share condolences and memories.
The guestbook expires on February 01, 2020.

Paul Danel
My heartfelt sympathy is with your family. I served as Stella's care manager at the Area Agency on Aging. I pray that God eases your grief.
Susan Mesko
Mrs. Zub is one very special lady... she taught me how to knit, quilt on a large frame and how to be patient and loving. There was always a warm smile on her face and so much love in her heart.
Michael and Mary Zabrucky
Stella was a wonderful Person and one a person WE will always treasure as a friend and my sister-in-law, whom I will miss very much. She will always be in my thoughts and Prayers. Love HER and WE will miss HER love and kindness. Mike and Mary
Jean Lehman Balchin
Patty, I'm so sorry to heard of your Mother's passing. I remember her so well. Keeping you and your family in my thoughts and prayers. I hope you're well, sweetie.
View all